We offer two ways for you to get a quote. Please choose from the options below.

There is always a lot of talk about which tread patterns are the most effective in certain operating conditions and environments. Extensive research is done annually by manufacturers, resellers, and even owners. Their research methods ranges from highly customized scientific equipment all the way down to some good old fashioned YouTube videos of two machines playing tug of war to see who has the best traction. All of that scientific research has lead to many upgrades over the years in tread pattern design.

These upgrades, allow machines to go into places they might not have been able to easily navigate in the past. It has also allowed for more specialization in rubber tracks for both seasonal and environmental uses. Some larger contractors are even installing specific tread pattern tracks on different machines for each purpose, while smaller operations may choose to change their rubber tracks seasonally as conditions change. An example of this would be someone doing residential work all summer with a non-agressive Turf track and then switching to a Zig-Zag in the winter to deal with the snow and mud.

So how did Zig-Zag get to the top?

Many years ago the C-Pad was the highest rated tread design for snow. Then, the Straight-Bar came out with improved traction, but there was nothing preventing you from sliding sideways. Since, the traction was all focused directionally. An improvement on that was the Multi-Bar tread pattern. Still highly suggested by some manufacturers, it is great for distributing weight for flotation while still giving that directional traction like the Straight-Bar. The Multi-Bar also minimizes operator fatigue compared to more aggressive tread patterns.

The next factor for traction during the snowy conditions is the width of the track. In recent years, even the smallest track loaders are coming out with wider rubber track options along with these new tread patterns. Previous generation Bobcat and Cat models that originally came with a 12.5″ wide standard tracks are now pushing to the 16″ width. Most of the larger models now come with an 18″ wide rubber track. Adding a Zig-Zag tread pattern with extra track width provides less ground pressure with more traction. The best part is that you can now get the Zig-Zag pattern in all compact track loader rubber track width options, and in every guide system. So, you can get a track with a Bobcat guiding system or a Takeuchi guiding system and still choose the most aggressive tread option. Keep in mind though, if you are clearing snow and you upgrade to a wider rubber track then you need to make sure your bucket or scraper attachment is wider than the new overall width or you won’t be able to drive up next to the edge of a curb or cut line without scraping your tracks.

In summary, the Multi-Bar is still a great option as the tread will conform to the surface and give you Straight-Bar type traction without the extensive vibration that you might experience with it. The Zig-Zag combines these two attributes and gives you maximum traction and reduced vibration. Thanks to its off-set waves in the tread pattern. The Zig-Zag also prevents sliding from side to side and are now are made directionally with a step-down support bar behind each row of traction lugs to give the track extra support where it’s needed which solves the previous generation’s initial cracking concerns. No wonder why it's the king of snow friendly tread patterns.

Now that you know how well a Zig-Zag tread pattern handles the snow, please reach out to one of our experienced Rubbertrax team members with any questions you might have on how to best equip your track loader for the snow season. 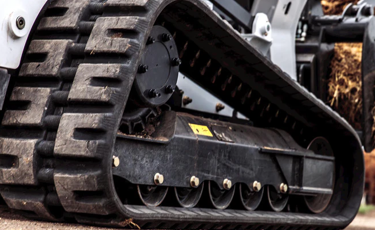 Showing your undercarriage some love

It's no secret that reducing wear on your machine's undercarriage will extend the life of your parts.... 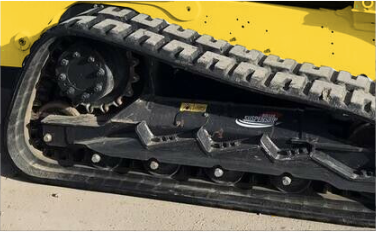 Compact track loader operators have been spoiled over the past few years as more.... 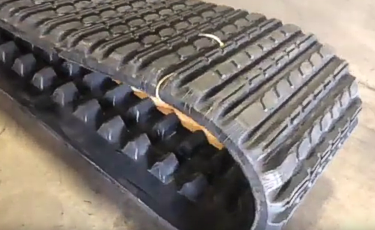 Are you confused by all of the different width options and how many drive lugs are on your multi-terrain loader...